For some unknow reason you use long underscores in MANY css calls. Unfortunately it seems those cannot be changed via custom css under appearance? For example:

has absolutely no effect. I have tried this with several other css calls where you use a long underscore. Why do you do that and how can I alter that CSS?

The reason you cannot change it is because its not a long underscore, but double underscore _ _

So by using a long underscore, you target an element that does not exist

Try to throw on ! important;

See if it works.

We use BEM notation for naming CSS classes, it uses double dashes and underscores BEM — Introduction It’s also used by WordPress itself for its editor blocks.

The rating circle is a bit tricky because it’s rendered via JS, but you can try this CSS snippet: 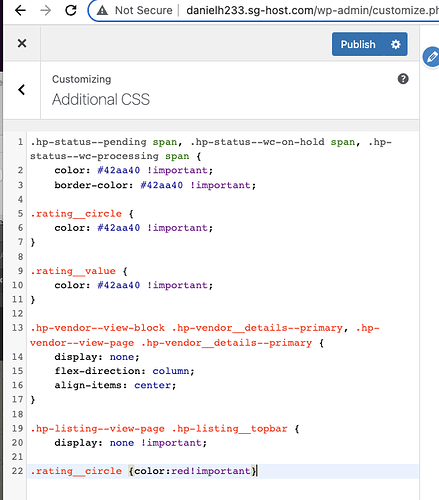 as you can see here all of the items with the double underscore appear in red, as in they are not recognizable code

The first CSS block doesn’t seem to be enclosed, please try adding a missing bracket on line 4 - then the following CSS should be applied.

Well that makes me an idiot! i’ll try that…

This topic was automatically closed 30 days after the last reply. New replies are no longer allowed.